Popular broadcaster and host of Angel FM’s morning show, Kofi Adoma Nwanwani was rushed to the hospital yesterday after some unknown assailants attacked him.

According to viral reports, the broadcaster was returning from DAMAX Estate, Kuntunse, a suburb of Accra when he was crossed by some alleged assassins who attacked him around old Ashongman.

The attackers, who were riding a motorbike, accosted him and attacked him with a sharp object, inflicting serious injuries on his body.

A source told the press that they tried to set him ablaze but he was saved by the timely intervention of passersby.

“He was crossed by the guys on a motorcycle. They targeted his face with sharp objects but he used his hands and shoulders to avoid many wounds on his face. They pour inflammable substance believed to be petrol and tried setting him on fire.”

While his fans consoled him and wished him a speedy recovery, Afia Schwar recorded a video making allegations  of what happened to Kofi Adomah.

Schwar laughed hard as she sang an old high-life song that talks about the adage, “had I known, is always at last.”

She included in her submission that many have advised the broadcaster to stop chasing married women but he paid deaf ears and now he has paid the price.

Afia Schwar being the minister of Vawulence knew how to communicate her thoughts to troll the broadcaster without mentioning his name.

She left that job for her fans to do just to escape lawsuits. Watch the video below. 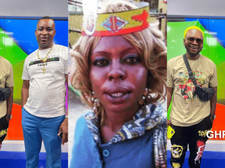